Thursday 21st March may well have been a miserable evening of rain and recession, but queues of anxious people formed in Stroud Old Town Hall with money ready to renew or take out new membership of the Civic Society and coins poured into the bowls for Tim Mars’s illustrated talk: “ – Post-war Prefabs: Palaces for the People”. This was to be another of the many vibrant and informed talks given by Tim – either on foot marveling at Oxford old and new, with a tour of Worcester College thrown in – or along old London alleys and huge new shopping malls in Birmingham or Bristol.

First, however, came the Civic Society’s AGM, while behind us glittering glasses and bottles of good wine waited.

Our Chairman Juliet Shipman opened the meeting – and instantly we knew why the room was full. ‘We are’, she said, ‘members of the Civic Voice which brings us up-to- date information on planning issues and new legislation.’ She also told us that help and advice with local planning and connected matters was at hand for the Committee boasts a Conservation Builder, an Architect, a Planner and freethinkers of every kind.  Tim Mars made a passionate plea for an iconic building at the public enquiry into the McCarthy and Stone development at Timm’s garage while Juliet, with amazing energy and commitment heads the team; uncovering letters, articles, plans – new and old – as evidence for a multitude of proposals and questions that concern the Civic Society.

At the other end of Juliet’s line of duties, she organises amazing trips – to houses, galleries, museums of every kind, from ‘Downton Abbey’ (Highclere Castle) to local tucked away treasures like Bradley Court or to more distant London or Birmingham.

She moved us on next to David Austin’s Treasurer’s Report showing the Society’s funds as balanced and healthy and then on to Guy Williams’s Membership Report, where we saw on his clear, coloured chart that Civic Society membership has risen in a way the Tory party might well envy!

It was then Hugh Barton’s turn to step up and prove the efficacy of the Society. He explained lucidly the Society’s stance on two pending major applications – Baxter’s Field and Rodborough Fields and how the Society has dealt with these controversial proposals. 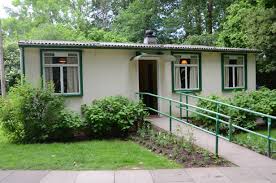 Finally, having enjoyed glasses of wine, talk and fruit juice, we sat as the lights dimmed and the projector screen lit up, ready to revel in Tim’s talk. A clean, bright ‘prefab’ filled the screen with a large archetypal grandmother, custom-made merry baby in her arms, firmly in front. The image symbolic of his talk in praise of flat-pack homes, that were really homes. Inside the ‘prefabs’ ducks flew across walls cosy couches and rugs added warmth and comfort, and delicate designer nets gave privacy.

Outside we saw a proud couple looking over their large garden, ‘prefab’ behind, all neatly planted up in rich allotment rows. We learned then of the 1944 Temporary Housing Programme which resulted in 156,623 prefabricated house (or ‘shabby sheds’ as Tim said they were sometimes called), being erected to a number of standard designs on sites across the UK.

They were like flat pack goods from Ikea and in fact some 19th century cottages were similarly made up on site.  The tin tabernacle flat- pack was shipped round the world. We saw photographs of a huge lorry outside the Tate Gallery with doll’s house-like exposed rooms including a fitted kitchen, with fridge and cooker that must have delighted people.

They were, Tim explained, very modern with room heaters – the equivalent of an Austin Maxi car. They went off to Camden Town, London, Aston Gate in Birmingham, Bristol where there were, Tim added, ‘seas of prefabs’ and all over the country – including Cam, Leonard Stanley and Cashes Green. Several, having outlived their predicted 10-year life span, and being hugely popular, have been listed, and many tenants are now resisting attempts to demolish their beloved ‘bungalows’.

These post war prefabs, were ,Tim  concluded, phenomenal, and it is well worth making a visit to Avoncroft Museum in Stoke Heath, Bromsgrove, where much on the history of prefabrication may be found.

Question time brought wonderful memories of visits to Aunts and Grandparents in their ‘prefabs’, and indeed of living in these amazing homes. By the end, as people began to leave I think many were congratulating themselves on having joined the Civic Society and the few who hadn’t, were surely thinking – ‘Next time I will!’

PS The development at Timm’s Garage will now proceed as McCarthy and Stone have won their appeal.

The next meeting of the Civic Society is on Thursday April 25th at 7.30pm at  the Old Town Hall  the speaker is former Bath Conservation Officer David McLaughlin and he will be talking about Bath during the war years – as seen through the eyes of John Piper and other artists.